Tweet
Economic impact of about 1.1 billion yen
For the first time in Japan! The “99th Annual Kiwanis International Convention” 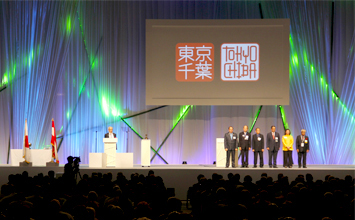 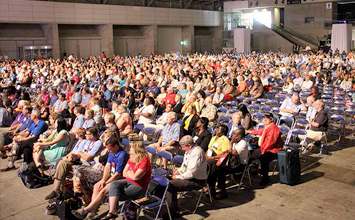 “Kiwanis International” is one of the 3 largest volunteer social service organization in the world with International Rotary and Lions Club. It is composed of around 210,000 members in 7,500 clubs (Japan: 29 clubs, around 1,750 members) in over 80 countries. Based on the slogans “serving the children of the world” and “children first” it has activities focusing on serving children bearing the future.
Even if there was not enough preparation from the bid acceptance and the opening day, Chiba Prefecture, Chiba City, Makuhari Messe, local businesses, and schools worked together to cooperate with the international headquarters, and leveraged its strong network to ensure the convention’s great success. The organizers highly-evaluated the strong hospitality and support among others and since the biggest selling point of Chiba Prefecture is the strength of its network, we will continue working with an “All Chiba” structure to implement more MICE holdings in the prefecture in the future.

From the bidding process to opening day 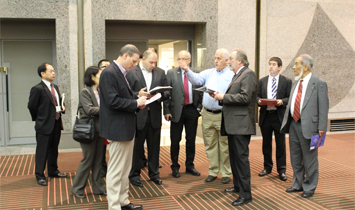 Regarding this conference, after obtaining information at the business meeting of the MICE trade fair "IMEX America 2012", which was held in Las Vegas in October 2012, we worked continuously in order to attract the event to Chiba by implementing direct negotiations with the headquarters in the United States while cooperating with Japan National Tourist Office (JNTO), Chiba Prefecture, Chiba City, Makuhari Messe and others. In January of the following year, Kiwanis International performed a site inspection in Chiba Prefecture and saw the high quality of Chiba City’s hotels and convenient access to Narita International Airport, and also from the fact that the conference would fall on the 50th anniversary founding of the Tokyo Kiwanis Club, the first Kiwanis Club in the Asia Pacific region, the bid became reality. 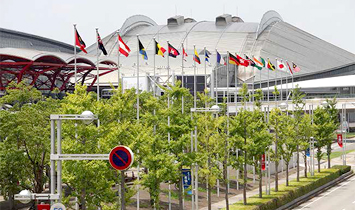 Makuhari Messe integrates the 3 facilities of “International Exhibition Hall”, “International Conference Hall”, and the “Makuhari Event Hall” on a sprawling 210,000 square meters of land to form one of the most well-known convention facilities in Japan. One of Makuhari Messe’s distinct features is that there are a number of various hotels within walking distance of each facility, no shuttle busses needed. In addition, having an ideal location at about 30 minutes of the heart of Tokyo and Narita International Airport, you could say that Makuhari Messe is the optimal MICE facility. MICE organizers often comment on the remarkable convenience of getting to Makuhari, and have a high-evaluation of its safety and clean streets.

At the opening ceremony, Prince Akishino said that he has sympathy for Kiwanis’ slogan, “a bridge to the future for the children”. The Governor of Chiba Prefecture and Mayor of Chiba City also gave welcome speeches, and the president of Kiwanis International gave his thanks for such polite hospitality. Also, as a special program of the opening ceremony, a video message from the United States Ambassador to Japan, Caroline Kennedy was played, showing great interest in the meeting.

OMOTENASHI by the whole region

Our Foundation brought enthusiasm to this meeting by working in cooperation with the prefecture and city governments, high schools, universities, and businesses.

Digital signage at Narita International Airport was displaying welcome messages to the participants, welcome banners were placed along the streets in Makuhari, and welcome stickers on the fronts of restaurants and other businesses in the area. In addition, students from a local high school received a standing ovation and extremely high reviews after a musical performance featuring choir and orchestra, and a dance performance. 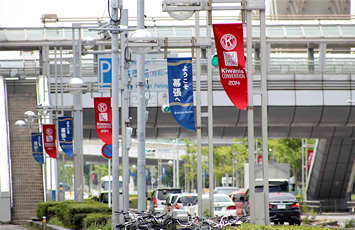 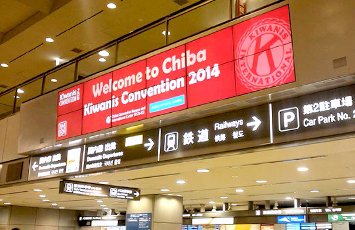 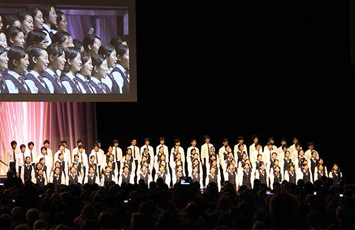 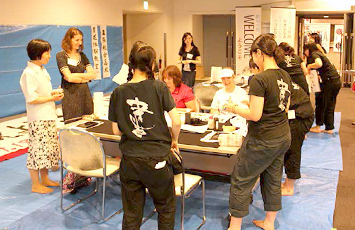 At the venue, during the breaks in the program, participants experienced Japanese history and culture such as Japanese culture (calligraphy, tea ceremony, flower arranging), a martial arts fair (Judo, Kendo), and a kimono show were also held and the participants had lively intercourses with local high school students, college students, and language volunteers dispatched by our Foundation.
At the Japan Night held during the conference, participants were immensely delighted by the folk entertainment attractions, including the “Funabashi Bakamen Dance” and “Sakura Taiko”, performed by a Taiko band, prepared with our Foundation support, which were a great success. Furthermore, in order to promote local tourism facilities, our Foundation arranged free shuttle bus service from Makuhari Messe to art and history museums in Chiba City and also distributed special discount coupons to the participants to use at the Aeon Shopping Mall Makuhari Shintoshin and Mitsui Outlet Park Makuhari, which are in walking distance from Makuhari Messe, as well as Tokyo Disney Resort Convention Passports (special price). 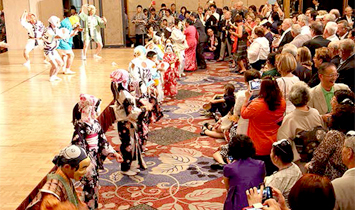 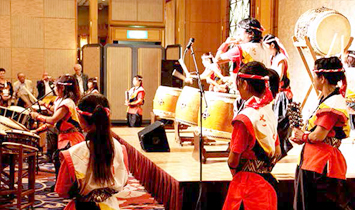 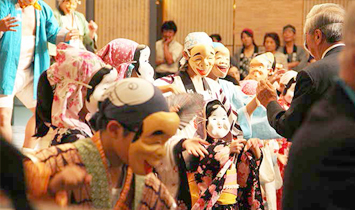 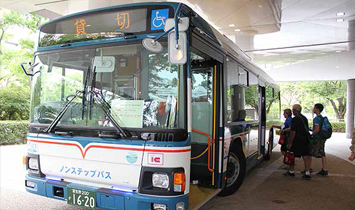 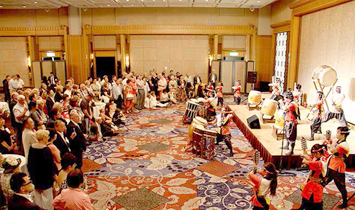 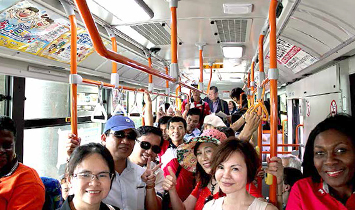 This time, in cooperation with the Chiba Museum of Art, a special exhibition was held to welcome Kiwanis. Moreover, as a first attempt, the “Sayado Hall” located in the museum was used as a unique venue. The “Sayado Hall”, ranked among the Top 100 Public Buildings, was constructed in 1927 in an authentic “Neo-Renaissance style” having pillars lining up with the internal central stairwell. Participants truly enjoyed a traditional lion dance and candy-making demonstration in this refined space.

*Unique Venue: Historic buildings, public spaces and others that can produce special feelings and show regional characteristics when holding meetings or receptions.
*Top 100 Public Buildings: Excellent public construction with roots in the community that was selected by the 1998 Ministry of Construction Selection Committee as part of its 50th anniversary for greatly contributing to the regional community 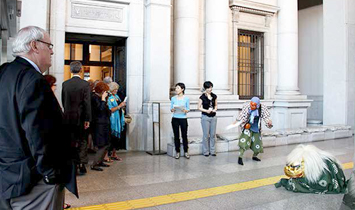 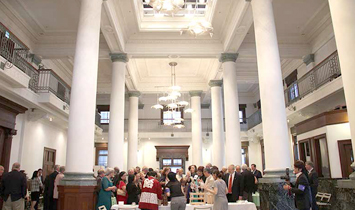